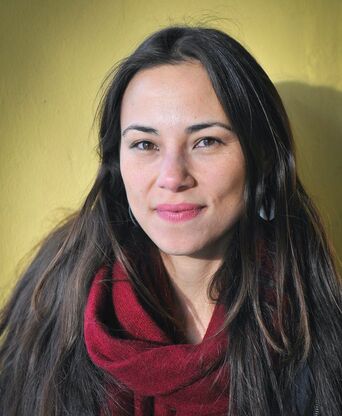 Fernanda Aoki Navarro is a composer of acoustic and electroacoustic music, developing concert music, intermedia works, performance art and installations.  She is interested in sound, in the idiosyncratic relationship between the corporeality of the performers and the physicality of their instruments, in the exploration between music and language, the use and misuse of technology, and in the transformational power that experimental music can exert on issues related to feminism and social otherness.

She was a fellow of the Radcliffe Institute for Advanced Study, at Harvard University, where she developed her research on intermedia environments, involving acoustic and electroacoustic music, projection mapping, tracking devices, issues related to embodiment, anatomy, ergonomics, privacy and mass surveillance.

Fernanda studied composition at Universidade de São Paulo, in Brazil, completed her masters at UC Santa Cruz, and her PhD at UC San Diego. Her music has been performed nationally and internationally by soloists and ensembles such as NY Philharmonic, International Contemporary Ensemble, Talea, Yarn/Wire, Fonema Consort, Gnarwhallaby, Platypus, Nadar, among others. Her works have been featured at festivals such as June in Buffalo, Banff music festival, Domaine Forget, Festival Internacional de Campos do Jordão, Visiones Sonoras, MATA, SEAMUS, NYC Electronic Music Festival, Darmstadt Summer Festival and others.

She is also engaged with promoting contemporary music, working as an organizer and curator of concerts and music festivals, such as Springfest, FIME, PRISMS New Music Festival, and the XX concert series. Fernanda is also an educator, working as assistant professor at Arizona State University.